If you haven’t already heard, there is a new Social Media site in town, and its name is Learnist. Sound strangely familiar to another popular Social Media site? Not only does its name sound a lot like the ever-growing Social Media site Pinterest, it also shares the basic concept of “pinning” items on boards for others to see. So who is responsible for Learnist and what are the intentions for the site?

Grockit, an online test prep company, is behind the creation of Learnist and has put a new and interesting spin on online learning. Although Learnist appears to have virtually the same concept as Pinterest, Grockit argues that the site is not just aimed at sharing for fun, but rather sharing for educational purposes. Learnist allows experts to create learning boards for specific topics and pin the best educational information available on the internet to corresponding boards. Instead of sorting through the endless pages of information available when searching a word or phrase on the internet, Learnist allows you to find the best educational information in a simple and organized way. Farb Nivi, the founder of Learnist, stated, “a person didn’t have the ability to collect resources, share notes and explanations, and order or reorder web assets in a way that helps the next person make sense of it all. That is what Learnist does. It makes sense of all the world’s information that already exists online, for free.”

What information can you expect to see on Learnist? Anything that educates another person on a specific topic can be pinned, which really leaves the possibilities endless. Perhaps you need to know some mathematical formulas, or maybe you just want to know the best restaurants around, it can all be found on Learnist as educational topics. Learnist allows you to place pins in specific orders. This makes it easy for followers to follow the information in a logical order. Learnist encourages users to post pins in a step-by-step fashion for easy learning. 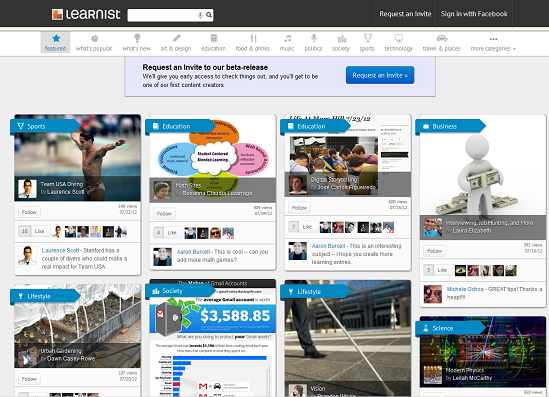 While although Learnist sounds like a great tool for teachers and students to utilize or really anyone who is interested in increasing their knowledge, the site has received a few continuous complaints.

You need to request an invite before being able to actually create an account. Some prospective users are complaining they sent out requests weeks ago and still have not received an invite. Is the site being picky on who they will allow to post information? Will the site continue this policy or will they make Learnist available to everyone, anywhere, anytime?

The only available sign in for Learnist is through Facebook. Some prospective users find this to be an invasion of privacy. They wish to stay anonymous and use a username that has no affiliation with their real name or personal life. But much like Pinterest, Learnist wants users to share their learning boards on their Facebooks’ for friends to see.

Will the content stay true to the goals of Learnist?

As previously mentioned, Learnist separates itself from Pinterest on the idea that the only content posted will be for educational purposes.

Much like Wikipedia, anyone will be able to post whatever information they want, whether it has value or not.

Much like Wikipedia, anyone will be able to post whatever information they want, whether it has value or not. So how will Learnist control what information is provided and make sure information is only for educational purposes? Well although that is nearly impossible to control, I believe the top two complaints will help with that in

some way. You have to request an invite using your Facebook account. Perhaps Learnist will turn away those they don’t feel will add value to the site. Or perhaps requiring a sign- in through Facebook will cause users to be cautious with what they post, due to the fact that it won't be anonymous.

The future of Learnist is unclear and will remain unclear until it begins to gain more popularity. Learnist has a unique concept that has the potential to be not only popular, but extremely helpful for many users seeking to gain more knowledge on a topic. Do you think Learnist has the potential to become as big as Pinterest? Are you interested in using Learnist? Leave your comments below and let us know!

Getting Started With Keyword Research

Google processes more than 40,000 search queries per second, according to recent estimates. You don…
Learn More >

The Psychology Behind the Open-Loop: Keeping Your Audience Coming Back for More
Getting Started With Keyword Research
What makes a website successful
Proprietary vs. Non-Proprietary Content Management Systems: Our Advice to You